Despite the pivotal position Taiwan plays in the military planning of the People’s Republic of China and the United States, defense issues played a mostly negligible role in Taiwan’s January 16 presidential and legislative elections. However, the desire for a stronger indigenous arms industry has been a recurring topic in President-elect Tsai Ing-wen’s campaign, one that she continues to emphasize ahead of taking office in May (Apple Daily, October 29, 2015; United Daily News, March 11). [1] Advocacy for an indigenous arms industry is not confined to within Tsai’s Democratic Progressive Party. The Ministry of National Defense has stressed the need for self-reliance in terms of both industrial capability and ability to sustain defensive operations without external assistance for some time (China Times, March 30). [2] The prominent role indigenous defense production will play in the future is also prompting Taiwan to seriously debate just how to formulate its defense strategy.

In September 2014, the ROCN revealed its 20-year plan for force structure modernization. [3] A prominent feature of the plan is that advocates of larger ships within ROCN apparently won out against those who proposed that smaller, stealthier ships be adopted with the goal of maximizing their survivability. However, the plan drew criticism for its apparent effort to rebuild the navy piece by piece without due regard to survivability of large surface ships under wartime conditions of contested control of sea and air. [4] Pursuing both strategies while attempting to produce as many ships as possible domestically is untenable, and a constrained budget also means that there is little space for failed projects. 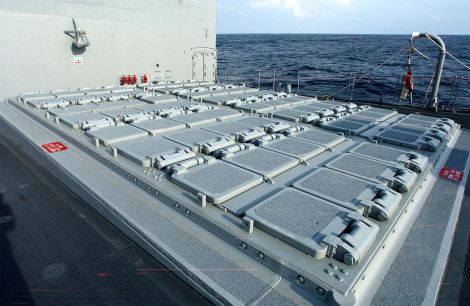 Part of the Hsun Lien Project is the intended acquisition of the Mk. 41 Vertical Launch System (VLS), capable of accommodating variable configuration of surface-to-air and anti-ship missiles. The recent breakdown in negotiation between Lockheed Martin and Taiwan’s National Chung-Shan Institute of Science and Technology (NCSIST) over the acquisition and technology transfer of the Mk.41 offers a glimpse into the convoluted history of such developments, as well as inherent limits of Taiwan’s arms indigenization drive (Storm [風傳媒], April 1). Taipei may be able to research, design, and build its own advanced weapons, but it will still need U.S. assistance in regards to sales or technology transfer of key components.

Taiwan’s first serious attempt at acquiring ACS capability can be traced to the ROCN’s last major replacement cycle with the Kuang Hua 1 (光華一號) project, which resulted in the production of eightCheng Kung-class (成功級) frigates based on the U.S. Oliver Hazard Perry-class (OHP) as the intended platform. The Request for Proposal (RFP) for independently developing the ACS was issued in August 1991. However, even with the use of commercial off-the-shelf (COTS) parts, the estimated development and production costs of the first vessel, a modified Cheng Kung-class hull designated Tien Dan, were to be a staggering $1.3 billion (1994 dollars), almost a third of the price of the Nimitz-class John C. Stennisaircraft carrier (launched in November, 1993). Ultimately, the proposed ACS modification was abandoned and Tien Dan was completed as the last ship of the Cheng Kung-class.

The failure of the ACS project revived Taiwan’s interest to acquire the Arleigh Burke-class destroyers. However, both the financial prospect and the likelihood of receiving approval from the Legislative Yuan (Taiwan’s national congress) deterred such steps. The ROCN first received four pre-ACS Kidd-class destroyers as an interim solution, and was unable to accommodate the 2004 offer of four retired first generation Ticonderoga-class cruisers due to budgetary constraints, and a follow-up plan to purchase eight retired USN Oliver Hazard Perry-class and equip them with a smaller version of Aegis in 2010 also failed to materialize (Apple Daily [Taiwan], October 12, 2004; Xinhua, January 11, 2010). Hence, the Hsun Lien project has emerged as another domestic attempt to address ROCN’s struggle for advanced fleet air defense. The Navy can still utilize the blueprint developed for the original ACS project—all that is required is to integrate the 3D phased-array radar developed by the NCSIST, a VLS acquired via technology transfer or supplied by U.S. manufacturers, and a close-in weapon systems (CIWS) to form the core of the ACS.

It is not too difficult to understand the ROCN’s obsession with acquiring an Aegis-like capability. A system with faster response time, integrating multiple weapon systems, and able to track and engage a large number of targets appears to be a perfect fit for a navy like the ROCN that is faces an adversary with superior numbers, and that is able to engage Taiwanese warships from land, sea, and air with a variety of anti-ship cruise-missiles (ASCM).

Nevertheless, the unique dilemma facing Taiwan’s military may tax even the advanced capability of the Aegis. Even the best-equipped ACS vessel would quickly lose combat effectiveness after exhausting its complement of defensive missiles. Potential adversaries could stay within ship radar’s shadow zone, and only appear briefly to acquire targeting data and launch an anti-ship missile.

This is not a new situation. In 1987, FFG-31 USS Stark was hit by the Exocet anti-ship missile launched from Iraqi Mirage F1, which mistook the U.S. frigate for an Iranian warship. During the engagement, the crew of the USS Stark did not have enough time to fire at the incoming Mirage, which appeared on the Stark’s radars only briefly once it locked on. Modern ACS vessels are much more capable than the USS Stark was in late 1980s but the tactics employed by attacking jets would not differ significantly from the way they were employed then. The timeframe is still too short for the ship to engage the launch platform, especially if the launch platform is directed by stand-off surveillance assets, and requires only brief exposure to acquire targeting data.

The result is that the fleet is bound to spend valuable missile loads with little to no chance to resupply as opposed to the enemy air-launched ASMs, which could be easily resupplied once the plane returned to base. The instinctive way out would be to avoid confrontation with superior land-based airpower, and passively engage what little that got through. However, in the Taiwan Scenario, such course of action would cede initiative to the adversary, and effectively render the fleet irrelevant for the majority of the conflict.

ROCN’s woes do not end with problems inherent to conditions of modern fleet air defense. The Navy also plans to engage the enemy by employing problematic doctrine. The ROCN’s wartime plan can be divided into two major stages. [5] The first stage of the plan aims at preserving the combat potential of the capital ships. Hence higher-tonnage vessels, i.e. destroyers and frigates, divided into Surface Action Groups (SAGs) centered around the Kidd-class destroyers would attempt to retreat beyond the reach of Chinese land-based airpower. Smaller combatants would then bear the bulk of operations against People’s Liberation Army Navy (PLAN) movement across the Strait.

The second stage of the plan consists of rapidly introducing these capital ships to intercept the enemy in a decisive battle once the timeframe and strategic intent of the enemy becomes clear. During this stage, surviving smaller combatants would integrate with the SAGs.

Moreover, the ROCN is also expected to perform the secondary mission of fire support to ground troops during an amphibious invasion scenario, and the tertiary mission of keeping the sea line of communication (SLOC) open, should the conflict persist and exhaust Taiwan’s strategic reserves. 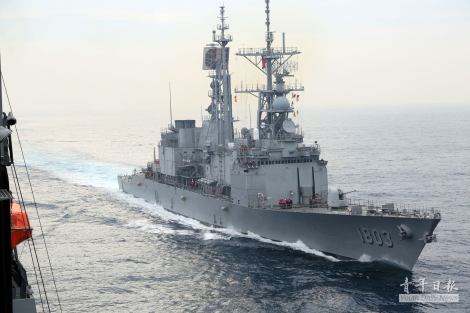 However, the crucial issue of rapidly introducing the bulk of the fleet into a decisive battle has never been fully addressed. In a modern conflict, the side that is able to achieve critical concentration of forces at crucial time and location is able to not only seize the initiative, but exploit it for tactical and/or strategic gains. Possessing an advantage in intelligence and exceptional mobility to maneuver superior forces into position is of paramount importance in such endeavor. Under the scenario listed above, it is not apparent what steps the ROCN has taken to ensure these conditions.

Taiwan’s Navy does plan to employ various advanced concepts such as over-the-horizon targeting (OTH-T) through integrated C4ISR network with aerial assets, including the S-70C helicopters, or new generation of UAVs. [6] The completion of Po-sheng Project (博勝案) allowed cross-branch communication and coordination without the need to go through the Heng-sheng Tri-Service Command Center (衡山指揮所) (Liberty Times, August 30, 2011). However, it remains unclear how the Navy, or the armed forces in general, plan to ensure the survival of these nodes in the C4ISR network long enough for them to have an effect.

Waiting for a decisive engagement cedes the initiative to the enemy forces, which would do their utmost to deprive the ROCN the chance to implement their plan. A smaller, faster and stealthier fleet—while not possessing the endurance of an SAG—would be able to counter and harass the PLAN more effectively, perhaps preventing the culmination of a decisive battle.

Despite the plethora of issues facing the ROCN, the Hsun Lien project—especially its Distributed Architecture Combat System is still a desirable step forward. Taiwan’s Navy needs a scalable integrated combat system that could be deployed on ships of various displacement for various roles. But the force that the ROCN envisions, basically a modernized remake of a current fleet (and with more submarines), is a questionable direction to take. ROCNs Surface Action Groups rely to a great extent on the survival of its largest ships: current Kidd-class destroyers and their potential replacement. A turn to a small ship doctrine, supported by indigenous systems such as Hsun Lien ACS coupled with Mk. 41 VLS, could give the ROCN greater operational flexibility not unlike the U.S. Navy’s effort to achieve “distributed lethality.” 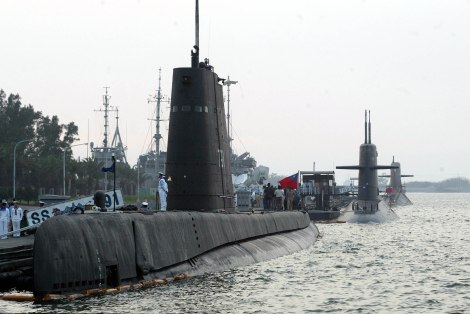 Perhaps the most problematic element of the current battle plan is the embedded assumption that the surface navy would still enjoy air support during a second-stage assault on the assembled amphibious fleet. However, it is extremely unlikely that Chinese leadership would agree with invasion plans without achieving air-superiority, if not outright air-supremacy, before proceeding with amphibious landing, operation demanding enough even with secured control of the air.

While the debate on the future role of the ROCN in defense of Taiwan should not be reduced to a “big ship versus small ship” debate, the logic ditching large surface platforms in exchange for more survivable smaller ships is hard to deny. Challenges facing ROCN would not end with a desirable turn to sea denial small-ship based fleet with a doctrine more befitting of Taiwan’s conditions. Even a sea denial fleet would face problems with over-the-horizon targeting and survivability under the conditions of PLA Air Force’s near air-supremacy. The fact of the matter is that in order to counter the threat represented by the PLAAF, a more closely integrated fire-control regime akin to the U.S. Navy’s Naval Integrated Control – Counter Air (NIFC-CA) with its distributed and loosely-coupled kill chain is the only viable option. The system possesses the potential to effectively integrate the resources from surface-based, ground-based, and aerial air defense assets to achieve a flexible yet robust cover around the vicinity of the island.

Michal Thim is a Research Fellow at the Prague-based think-tank Association for International Affairs, a member of CIMSEC, and an Asia-Pacific Desk Contributing Analyst for Wikistrat.

3. Some reports refer to 15-year plan, the two figures are possible result of later revision of the plan, although it is difficult to track it back as the MND website does provide archive for its press releases.

4. Even before the current plan, the ROCN has been criticized for insisting on large surface vessels organized in Surface Combat Groups (SCG) instead of opting for smaller vessels with stealth capability armed with anti-ship missiles. Two of the most prominent critics of current ROCN naval doctrine are Professors James R. Holmes and Toshi Yoshihara from U.S. Naval War College. Their two-part series inChina Brief on the difficulties facing the ROCN’s quest for sea-control, and possible solution in turning toward sea denial instead, is one of the first publications to tackle this problem. See part 1 “Taiwan’s Navy: Still in Command of the Sea?” <http://www.jamestown.org/programs/chinabrief/single/?tx_ttnews percent5Btt_news percent5D=36167&#.Vw5jDzB96hc>; and part 2 “Taiwan’s Navy: Able to Deny Command of the Sea?” <http://www.jamestown.org/programs/chinabrief/single/?tx_ttnews percent5Btt_news percent5D=36266&cHash=64801c799d#.Vw5jETB96hc>.