Donald Trump’s ascension to the White House has been a mixed bag for Beijing. On the one hand, Trump’s hostile campaign rhetoric was followed by acts that rubbed China’s nerves raw, such as his phone call with Taiwan’s President Tsai Ing-wen during the transition period, along with the new administration’s first arms sales to Taipei.

On the other hand, Trump’s businessman-like manner, the ­ambiguous role of Beijing-friendly figures like his son-in-law Jared Kushner, and his animosity towards the Trans-Pacific Partnership, all appeared as a set of positives that Beijing could capitalise on.

Since Trump’s inauguration in January, some moments have elated US allies, even as certain actions have made them anxious about the future of US commitment. China surely would not mind a slow disintegration of the alliance network that Washington maintains in the Asia-Pacific (or ­Indo-Pacific, as the new nomenclature goes). Thus, it was not unreasonable for pundits in China to view Trump’s presidency in a positive light.

However, the Trump administration’s new national security strategy will put questions about US alliance commitments to rest, at least for the foreseeable ­future. Trump is not likely to refrain from berating allies now and then, but the new security strategy firmly ­embraces what has been a mainstream approach to US alliances.

However, Trump’s (reluctant or not) embrace of long-standing alliances is not the primary takeaway from the new policy document.

The strategy openly declares a new era of competition, in which China is called out as a revisionist, rival power. It is a bold declaration, yet also a somewhat late admission that there exists a fundamental rivalry between the US and China.

Policy declarations of the past were more nuanced and attempted to shed a hopeful light on Sino-US cooperative potential. However, to many in Washington and other world capitals, those friendly gestures were wasted by Beijing.

This change of attitude did not happen without context. After all, the 19th Communist Party congress ­declared the dawn of new era of a strong and confident China, jettisoning Deng Xiaoping’s advice to lay low and bide time. It is no longer needed: not from Beijing’s perspective. America’s new security strategy merely spells out what has been a leading feature of China’s rise: that it is not as peaceful as Beijing wanted the rest of the world to believe.

Thus, the change in US attitude reflects both internal disappointments over the results of more than three decades of engagement with China, and Beijing’s desire to no longer hold back on foreign policy.

And then there is the question of Taiwan. Following elections in the island last year, Beijing’s attitude to the new government in Taiwan was unsurprisingly hostile, as it shunned any attempt by Taipei to maintain constructive engagement on matters of mutual interest. Not only has Beijing’s pressure not paid off, but its bellicose rhetoric has also alarmed Washington.

Beijing’s intention could have been a return to the framework of China-US-Taiwan relations during the mid-2000s, hoping Washington would treat Taiwan as a troublemaker, as it did back then. However, history is not repeating itself.

On the contrary, Taiwan earned a mention in the security strategy in a section elaborating on priority actions in the Indo-Pacific region: “We will maintain our strong ties with Taiwan [by] our ‘One China’ policy, ­including our commitments under the Taiwan Relations Act to provide for Taiwan’s legitimate defence needs and deter coercion.” This section does not really say anything new, as it is a statement of a long-held US policy. But not often does it appear so explicitly in an American policy document.

Beijing’s approach to Taiwan mirrors its attitude towards others in the region. Chinese confidence often results in clumsy declarations that only reinforce pre-existing suspicions about Beijing’s intentions. China’s military flexing its muscles along its borders produces similar results. The increase in the PLA air force’s long-range bomber patrols around Taiwan and the testing of Taiwan’s air defences by their fighter jets has merely served to alarm the US and Japan. 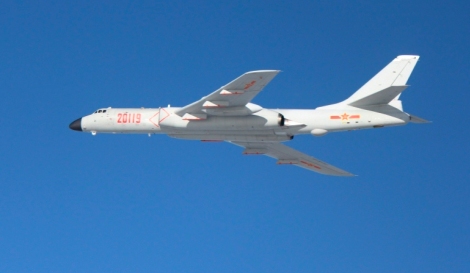 PLAAF’s H-6K bomber has been a common occurrence around Taiwan in 2017. Image Credit: MOD of Japan/CC BY 4.0

The bad news for Beijing also is that its long-standing attempts to manipulate Washington into accepting its rigid “One China” principle, instead of America’s flexible “One China” ­policy, have failed.

The early days of the Trump ­administration had seemed to offer a window of opportunity, due to the lack of experienced Asia hands on the team. But the unambiguous wording in the security strategy about Taiwan is a clear message that there have been no changes in US policy, except that China can expect Washington’s more active engagement with Taipei.

The US security strategy places Sino-US ­relations outside ambiguous niceties, and in many ways reflects a change in attitude that has been brewing among US defence and foreign policy circles from long ­before Trump became a viable candidate for president.

It also reflects the change in China’s attitude, and the more confident – some may say more aggressive – attitude that President Xi Jinping’s China puts on display. In this respect, the persona of the US president is just one of many variables. The US security strategy also ­declares in no uncertain terms that Beijing will not dictate US policy on Taiwan.

Based on this clarity, the two powers may attempt to create an environment where competition still exists, but peace is sustainable.

This article originally appeared in the South China Morning Post on 20 December 2017, as Why Trump’s new security strategy on China and Taiwan means the gloves are off in Sino-US rivalry.
Michal Thim is a Taiwan defense specialist, a Research Fellow at the Prague-based think-tank Association for International Affairs, a member of CIMSEC, an Asia-Pacific Desk Contributing Analyst for Wikistrat, and a founder of Taiwan in Perspective. Michal tweets @michalthim.