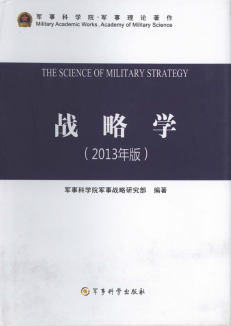 The Science of Military Strategy 战略学 (2013)

Team of authors from RAND Corporation who worked on a 2015 report China’s Incomplete Military Transformation: Assessing the Weaknesses of the People’s Liberation Army (PLA) stated on the importance of both publications (p. 4):

Some of the Chinese military books we relied on most heavily in areas related to military strategy are the three editions of The Science of Military Strategy (Gao Rui, 1987; Peng Guangqian and Yao Youzhi, 2005; and Shou Xiaosong, 2013), which were published by Military Science Press, the publishing house of the PLA’s Academy of Military Science.4 We consider these three volumes to be authoritative representations of PLA thinking on issues of military strategy.

In respect to The Science of Campaigns, authors argue that:

To the best of our knowledge, these are the most authoritative publicly available sources on Chinese military thinking about the campaign level of warfare.

Peter Mattis stresses the primacy of The Science of Military Strategy (SMS) for analysis of Chinese military:

One of the first clues about whether someone is a credible analyst of the PLA comes from their preferred source for Chinese military thinking and strategy. If someone places Unrestricted Warfare above (or perhaps does not even reference) The Science of Military Strategy, then that analysis offers little insight into how the Chinese military actually has settled on how to wage war and protect China’s national interests.

The SMS is a particularly valuable resource for understanding China’s evolving strategic approach to network warfare. A study that aims to be as comprehensive as the SMS cannot afford to ignore network warfare due to the centrality of information warfare to modern war-fighting, and the process by which the SMS is written ensures that the information analysts receive on network warfare represents something approaching an authoritative consensus within the PLA.

The 2001 edition of the Science of Military Strategy was translated to English in 2005 but this translation is increasingly difficult to obtain. The Science of Campaigns exists only in Chinese language. Fortunately for readers who struggle with their Chinese, there are high-quality secondary sources in English. Consider some of the following links as a good starting point.