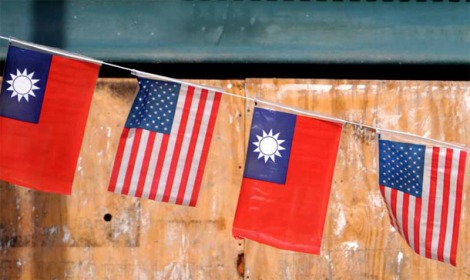 Lyle J. Goldstein is an Associate Professor in the China Maritime Studies Institute (CMSI) at the U.S. Naval War College and one of the foremost experts on the People’s Liberation Army (PLA). He is running the Dragon Eye column on The National Interest magazine. His latest piece on Taiwan-China relations published on November 28 is a subject of the first Soundbite* post on this blog.

Goldstein’s article would likely be disappointing for anyone who expected deeper treatment of how Chinese experts view development in Taiwan. Only two authors’ views are presented, Li Jiaquan’s (李家泉) “Tsai Ing-wen exposed her “true colors”in the U.S.” (蔡英文美国行暴露了“庐山真面目”) and Yin Maoxiang’s (尹茂祥) “The Evolution and Trend of the Issue of Cross-Strait Peace Agreement” (两岸和平协议问题之演变与趋势). Nevertheless, it still provides an interesting insight into a worldview of China’s Taiwan scholars.

One Goldstein’s citation from a paper by Yin Maoxiang stands out:

In the wake of the “rebalance,” Washington is said to have “continuously strengthened its political and military control of Taiwan” in order to “以台制华” [use Taiwan to control China] and to prevent the cross-strait relationship from transcending the status quo.

This is not anything particularly new. It serves better Beijing’s propaganda purposes to portray overwhelming opposition to unification by Taiwanese people as a work of American manipulation and a small minority of disgruntled extremists in Taiwan, who wish to perpetuate separation of Taiwan from the rest of Chinese nation, no matter how far from reality it is. This line of reasoning takes away any agency from the Taiwanese and puts it in a hand of manipulative third power. More worrying would be if Yin’s line of thinking represents a true conviction among China’s Taiwan experts, and not a part of official propaganda on Taiwan.

Interestingly, Yin Maoxiang’s point about the U.S. “using” Taiwan as a leverage against China does not alert Goldstein who surely knows how far from real state of affairs that is.

The only reason that Taiwan has been, by and large, out of the headlines since 2008 is that the island’s leader Ma Yingjeou quite radically shifted course from his two predecessors and bravely pursued a rapprochement with the mainland. That far-sighted policy has made for eight quiet years. Only readers unfamiliar with the very dicey situation across the Taiwan Strait from 1997-2007 could fail to appreciate the welcome and prosperous calm that has characterized the Taiwan issue over the last several years.

The problem with so called rapprochement is that it offers a tunnel vision view of cross-Strait relations. Last eight years also brought new, and in many ways unprecedented, tensions in the South China Sea and in the East China Sea and continuous militarization along China’s littorals, Taiwan Strait included.

There is no direct evidence that rapprochement in the Taiwan Strait allowed China to purse more aggressive stance elsewhere. However, looking at Cross-Strait relations in total isolation from the regional security situation is unseemly of analyst of Goldstein’s class. To be fair, Goldstein is of course aware of the developments in the South and East China Seas, and he puts those developments in a direct contrast with the absence of Taiwan as an issue of concern. Where Goldstein fails is inclusion of Taiwan in a broader perspective. Cross-Strait relations do not operate in a vacuum. Never mind the continuous modernization of the PLA with direct consequences for Taiwan, Japan, or The Philippines, among other regional states. One would expect that rapprochement would lead to less militarization, not more. Things are not great just because Taiwan does not make it to Western media headlines.

Since the meeting between Xi and Ma in Singapore in early November 2015, many Western analysts have tended to view those historic talks as a mere election year ploy. That is unfortunate, because the cross-strait rapprochement since 2008 has served American national interests well.

Reader may be left wondering what exactly is unfortunate? That Western analysts view the Ma-Xi meeting as an election ploy despite said rapprochement has served U.S. interests well? One could argue, U.S. interests notwithstanding,  that merits of those Western analysts’ arguments should be judged upon how much is said view grounded in reality. And somewhat less upon what kind of cross-Strait relations serve American national interests the best. It is entirely possible that some of those analysts have more intimate knowledge of Taiwan and cross-Strait relations than some PLA specialists. Even a first-class PLA specialist like Professor Goldstein.

To paraphrase Goldstein’s own words:  Only readers unfamiliar with the complexity  of the situation across the Taiwan Strait from 1997-2007 could see post-2008 development in overly shiny colours. Granted, cross-Strait relations prior to 2008 were full of heated rhetoric and perceived instability. However, in the same period cross-Strait trade increased 20-times from $4.5 billion in 1997 to $90 billion in 2007 and “Three Small Links” (小三通) negotiations laid foundation for opening of regular commercial air, sea and postal links after 2008. Likewise, last eight years has witnessed relative calm across the Strait but it meant very little for military balance in the Strait as Taiwan’s defense ministry reports continuously stress. Reader familiar with the situation across the Strait is naturally aware that post-2008 rapprochement is conditioned by Beijing’s preference for KMT staying in power. Tensions across the Strait are a result of Beijing’s agenda setting. Should the DPP win the elections in less than three weeks (and all polls indicate it will), no amount of conciliatory steps by the new government will stop Beijing from making problems.

*Soundbites will be irregular opinion feature bringing brief reviews of academic articles, editorials and other publications relevant to Taiwan content-wise.