June 1982 is a watershed in the history of modern air power for two reasons. First, it was probably the first and so far the last deployment of surface-to-air missile systems (SAM) with the intent to use them for offensive purposes (“offensive AD”) — that is, the denial of use of airspace by means of forward deployed air defenses. Second, it was also a very successful use of suppression of enemy air defenses (SEAD) doctrine with the use of innovative tactics of electronic warfare (after air, land and sea, the fully emerged fourth dimension of warfare).

Israel found itself on the wrong end of Soviet-built SAMs during the Yom Kippur war in October 1973. Nearly all of its combat plane losses were attributed to Egyptian and Syrian air defenses. Estimates vary, but approximately 100 planes, one quarter of the pre-war combat strength of the Israel Air Force (IAF), was lost to SAMs. Israel responded accordingly in the following years with plans for an integrated SEAD campaign, and in June 1982 those plans were put to the test.

Not unlike in recent years, prior to the 1982 Israeli invasion of Lebanon (Operation Peace for Galilee), the north of Israel was under threat of missiles fired from South Lebanon by the Palestine Liberation Organization (PLO) and hostilities along the border were frequent. Syria was supporting the PLO and had its own forces deployed in Lebanon, including Soviet SAM (SA-2/SA-3/SA-6 types). Upon the decision to invade, the IAF executed its SEAD campaign (Operation Mole Cricket 19) on June 9, 1982, with remarkable success: all SAMs deployed in the Beqaa Valley were destroyed, with minimal losses on the Israeli side. Apart from the employment of the latest generation of combat planes, including F-16 and F-15 fighter jets and E-2C surveillance aircraft, the IAF executed operations in coordination with other branches of the military and using innovative means in electronic jamming and unmanned aerial vehicles (UAV) for reconnaissance and as decoys.

In a follow-up engagement between Syrian and Israeli air forces, the IAF shot down over 80 Syrian planes with no losses suffered. While the Lebanon war of 1982 did not end too well for Israel, its operation over the Beqaa Valley was a masterstroke, albeit underscored by the incredibly poor performance on the Syrian side (by one contemporary account, the Syrians did not position radars to guide their SAMs on the hills to maximize their effectiveness because they did not want to dig up the latrines).

S-400 during rehearsal for Victory Day in Moscow in 2009. Image Credit: Wikimedia Commons

How this history relates to Taiwan? The proximity of China to Taiwan and the ever-increasing effective range of modern air defense systems invites the idea of the employment of “offensive AD” in Taiwan Strait conflict scenario. It appears that the recently concluded (after many years of rumors) sale of Russian SAM S-400 to China could give the People’s Liberation Army (PLA) the ability to use its air-defense systems to shoot down any targets within its range. “Offensive AD” is difficult to identify with a degree of certainty (hence the conditional qualifier in the opening paragraph) because it is inherently difficult to tell apart offensive and defensive actions once hostilities breaks out. But scenarios where the PLA employs its advanced SAMs with long-range capability such as Russian S-300PMU and the new S-400 for offensive purposes are as close to the idea as it gets. On April 18, 2015, Defense News reported on the S-400 sale and the restrictions it may pose to Taiwan:

The 400-kilometer-range system will, for the first time, allow China to strike any aerial target on the island of Taiwan (…) China’s current inventory of S-300s, at a range of 300 kilometers, only allows it to strike targets along Taiwan’s northwestern coast and cannot reach capital cities in India and South Korea, said Alexander Huang, chairman, Council on Strategic and Wargaming Studies, Taipei. The S-400 will challenge Taiwan’s ability to conduct air defense operations within its own ADIZ, which covers the Taiwan Strait.

In similar fashion, one expert consulted by the Want China Times argued:

Once the S-400 is deployed, the Republic of China Air Force will be completely useless to stop China’s anti-access and area denial strategies even if it purchases F-16C/D fighters from the United States. “Given its extremely long range and effective electronic warfare capabilities, the S-400 is a game-changing system that challenges current military capabilities at the operational level of war,” said Paul Giarra, the president of Global Strategies and Transformation.

It appears then that by a stroke of one arms sales, Taiwan’s air force is instantly doomed to destruction, and the skies over Taiwan are all but under China’s control, even if passively by extension of the new capability. But not so fast, let’s deal first with the technical limitations of employing the S-400 as an “offensive AD” in a Taiwan scenario.

The first difficulty is imposed by the curvature of the earth. The missile may well have an effective range of 400km, but that does not mean it can hit targets from zero altitude to the claimed 30km. Taiwan air force (ROCAF) fighter jets taking-off from bases on the west coast would be safe at least until they climb to over 10,000 feet (about 3km). While that is still relatively low compared to usual operational altitude of over 20,000 feet, it is high enough to engage incoming PLA Air Force (PLAAF) combat aircraft. ROCAF jets taking off from east coast bases would enjoy additional protection from Taiwan’s central and coastal mountain ranges. Moreover, target acquisition by S-400 designated radars would be equally compromised.

Secondly, even though the S-400 is capable to reach targets as far as 400km, with greater distance the missile’s performance is compromised as it gradually loses maneuverability after it burns all fuel, thus making it easier for its target to dodge the missile with electronic counter-measures and evasive maneuvers.

Thirdly, even if Taiwan won’t be in a position to execute as effective a SEAD campaign as the IAF did in 1982, it can still apply some elements of “passive SEAD,” including jamming of the SAM radars and innovative employment of UAVs.

Last but not least, it is not yet clear which type of missiles Russia will supply with the S-400m system. Only one type has an effective range of 400km, and if past examples are of any guidance, Moscow will carefully weigh the pros and cons of making the best features of the system available to a foreign client.

Technical difficulties aside, “offensive AD” would be a bad option for China. First and foremost, using SAMs for offensive operations restrict one’s use of combat aircraft in the theater of operations — i.e. PLAAF planes would need to stay away in order not to become targets themselves. While this may be considered as hypothetical scenario, it does not make much sense after China invested considerable resources acquiring enough air power to gain air superiority over Taiwan. “Offensive AD” is just an attempt to achieve area-denial as an alternative to achieving air superiority by more traditional means. By definition, this “asymmetrical” approach is preferable only if one’s air forces cannot outperform the opponent’s. The Syrians in 1982 were in this situation, as demonstrated by their stunning defeat following the destruction of their SAMs. While the actual combat performance of PLAAF pilots is an unknown variable, it is hard to imagine they would ever come close to the lows of the Syrian air force in June of 1982.

In short, despite acquiring what is undoubtedly one of the most advanced air defense systems today, “offensive AD” would be a poor option for the PLA should it ever decide to use force against Taiwan. In the end, the S-400, the older S-300 and any other air defense systems perform optimally when they are employed to perform their original function and not only because any SAM performs better the closer it is to the target.

Beijing’s decision to proceed with the S-400 purchase is more likely motivated by its missile defense capability rather than its presumed effective range. China is a quick-learning newcomer to the missile defense game (while it has been largely interested in developing precisely those capabilities that missile defense systems are supposed to target). The acquisition of an advanced system from Russia indicates that despite progress in terms of development of its own air defense platforms, China still lacks the wherewithal to develop efficient missile defenses on its own.

Be that as it may, considering the limitations of “offensive AD” and the already deployed SAM network on the Chinese side of the Taiwan Strait (which should provide enough deterrence for the ROCAF to avoid missions beyond the median line in the Strait), it seems to be more prudent for the PLA to use the newly acquired S-400 to protect their key installations (e.g. communication nodes, Second Artillery HQ, et cetera) from the threat of missile strikes. The PLA already has the potential to achieve air superiority over Taiwan and the new system is not a game changer. The S-400 will therefore be of greater use elsewhere.

What the deal expresses more clearly is Moscow’s willingness to proceed with weapons sales to Beijing despite past bad experiences. While it may be a sign of a burgeoning “strategic partnership,” it is also a logical step following the purchase of large numbers of S-300 systems in the past. In this context, it is worth taking note that by the time China starts receiving its S-400 in 2017, Russia will likely have begun deploying the new S-500, which is currently in the final stages of development.

This piece was originally published on Thinking Taiwan on 21 April 2015. 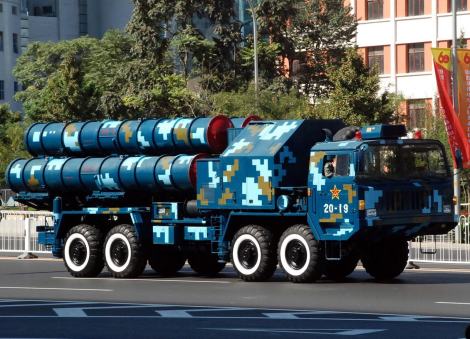