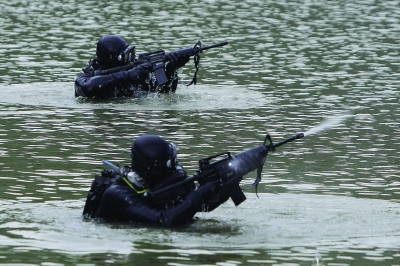 Plans are underway to transform Taiwan’s military from a force relying on a regular intake of conscripts aged 18-35 and serving 11-12 months, into a fully professional, all-volunteer force (AVF). Thus far, the road has been rocky, to say the least.

Reading these figures, it needs to be considered that they are nominal requirements and, more often than not, many positions go unfilled, thus the real strength can be considered even lower. Part of the reduction is simply empty positions being cut. Another aspect is the gradual phasing out of conscripts and replacing them with volunteers. Full transition to an AVF has been part of the national defence program dubbed “Hard ROC,” first floated by then presidential candidate Ma Ying-jeou, whose ideas were inserted into the first Quadrennial Defense Review upon his election as Republic of China (ROC) president in 2008.

The transition to an AVF is, in part, a response to Taiwan’s demographic predicament: the island is beset by a declining birth rate; one that is already below the level needed to sustain the current numbers of men and women in the 18-35 age group. The other rationale behind the AVF transition stems from levels of operational requirements. As joint cooperation between military branches becomes a necessity of modern warfare, a smaller AVF force is better-suited to conducting complex tri-service (army, air force, navy) operations than a conscription-based force. This is generally due to better training in terms of quality and quantity. Considering that Taiwan’s armed forces face a formidable opponent in the People’s Liberation Army (PLA), Taiwan’s defence needs cannot be based on a quantitative basis—matching the enemy man-for-man, plane-for-plane, tank-for-tank—but rather must be addressed asymmetrically.

Transition to all-volunteer force in a broader sense did not start in 2008: By then, already 60 percent of manpower was made up of non-conscripts. Moreover, the branch that traditionally relies heavily on conscripted civilians joining the force for a limited period of time is the army. Due to training and combat-readiness requirements (among other factors) the navy and air force are branches with a higher ratio of volunteers to professional servicemen.

Current plans for the AVF transition still call for every able-bodied Taiwanese male of conscription age to undergo a four-month long basic training, with short-term exercises every two years for selected reservists. Critics of the program have characterized this level of preparation as inadequate, and potentially contributing to a decline in combat readiness. At least on a basic level, however, there is hardly a better way to keep reservists combat-ready.

Furthermore, in the event of a general mobilization, reservists would primarily support army units deployed to repel an invasion and serve as back-up units. This does not necessarily require constant training. As experience from ongoing conflicts elsewhere show us, even a purely civilian population can be turned into a reasonably effective combat force in a relatively short time. A case in point is the civil war in Syria. Moreover, reservists in Taiwan would be put under the command of skilled officers whose primary responsibility would be combat readiness in order to conduct joint operations effectively. In general terms, the AVF transition should allow for a better leadership corps, particularly at the non-commissioned officer (NCO) level, which in turn would mitigate the impact of having a large portion of reservists with only a minimum level of basic training. To apply this general assumption to Taiwan’s case, this particular need has to be addressed in budgetary terms and consideration of the overall force structure. To wit, an all-volunteer force in Taiwan would need more NCOs and fewer generals.

Thus, the AVF transition appears to be a sensible course of action, and in many ways a necessary response to Taiwan’s particular defence needs and its demographic potential. Yet this reasonable policy faces considerable implementation issues that had better be addressed before hastily transitioning to an AVF.

The first issue is the number of incoming volunteers that, during the initial years of recruitment, were significantly below annual targets. The ROC military attracted roughly 6,500 volunteers in 2011 when it was aiming for nearly 12,000; and only about 11,000 in 2012, missing its target by 4,000 recruits. The figures for 2013 were even more dismal, with the figure of 8,600 well below the annual target of 28,500 volunteers. 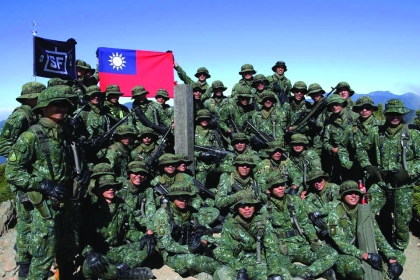 This failure to attract sufficient recruits prompted the Ministry of National Defense (MND) to postpone the date of full transition to early 2017, revising the original 2014 target to 10,000 recruits, as well as implementing a pay raise and a revision of the requirements for admission. As of November 2014, nearly 12,000 volunteers have been accepted, reaching the annual target for the first time. On paper this looks good, except that it is the result of a downward revision of the annual benchmark to an easily achievable number, rather than a case of recruiting efforts meeting staffing needs in terms of quantity and quality.

The second issue, very much related, is inadequate funding. More often than not, Taiwan is the subject of critique, often in connection with arm sales, implying an inability to procure modern weapons systems. While such criticisms are not misplaced, the main problem is not a procurement issue. The ROC government has, on a few occasions, dealt with a pending arms sale by adopting a special budget outside of regular defence spending. In other words, if an offer is made (i.e. Taiwan’s request for an arms purchase is granted), financing that particular case is less a problem of low defence spending than it may seem.

The real problem is with the structure of spending. In 2008, President Ma pledged a ratio of 4:3:3 for personnel, operation and maintenance, and defence investments costs. The reality in 2013 was a ratio of 4.75:2.32:2.77. With a full transition to AVF, personnel costs will only rise further, and the operation and maintenance part of the budget will suffer together with defence investment, including research and development. Part of the problem related to procurement is that, as current equipment gets older, maintenance costs increase. Prior to 2008, the Kuomintang (KMT) pledged to raise the defense budget from around 2 percent of GDP to 3 percent. This never happened. A similar vow is currently being made in the run-up to the presidential elections in 2016, this time by the opposition Democratic Progressive Party (DPP). Ultimately, Taiwan’s politicians will have to come to terms with the fact that defense is a bipartisan issue, and it will take a cooperative effort on the part of all parties in Taiwan to make an AVF force financially sustainable. One thing is clear, however: If spending remains at current levels, the country’s defence posture is heading toward disaster.

The third issue, and an equally urgent one, is building a better image of the military among the general public. One disadvantage of the AVF concept is that it takes military service away from “the people.” Ironically, the AVF also addresses a rather low level of respect for the ROC armed forces in the public eye. However, it ultimately approaches the problem from the wrong end. Low morale among the public is as serious as low morale among the troops: an AVF would remove the “conscript problem,” but it does not address the military’s poor public perception. The people of Taiwan will be more sympathetic to an increases in defence spending if they have a better sense of what the mission of the armed forces is: what are the threats facing Taiwan, and how does the government plan to respond to them? In other words, there needs to be a public discussion about ends, ways, and means—one in which the people of Taiwan have input.

In other parts of the world—Europe in particular—transitions to professional militaries were partially in response to decreased tensions following the end of the Cold War, and the subsequent (albeit misguided) perception that in the post-911 world, conventional war between states is no longer a primary concern. The latter belief led smaller states to scale down their armed forces, with some maintaining a particular specialisation that could be integrated with allied forces for missions abroad and disaster-relief operations at home. However, following the breakout of the crisis in Ukraine, states have begun rethinking the utility of the AVF system.

The Czech Republic in particular has begun a process of partial reintroduction of basic training, similar to the four-month provision in Taiwan. This, of course, is not exactly a case that parallels that of Taiwan, which maintains an all-purpose territorial defence-oriented armed forces. But it is a cautionary tale regarding the AVF transition, wherein policymakers were caught not having taken into consideration the potential for dramatic changes in the national security environment, and having rushed headlong into a situation wherein the military is disconnected from the public consciousness (for the convenience of the latter), which as a consequence begins to question whether defence spending is even justified.

The revision of annual targets has been a necessary reaction to low recruitment rates. Raising servicemen’s pay is another practical solution in the right direction, but more needs to be done. The ROC military cannot expect to attract skilled soldiers if the pay is not competitive with what can be earned in the civilian sector. This refers not just to IT experts and doctors, but to mechanics as well.

To date, the military could utilize these skills on a low-cost basis that will end with full transition to an AVF. Ultimately, reaching admission targets is only one of a host of problems facing a successful AVF transition. The three problems outlined above—admission targets, money, and public support—are very closely connected and need to be addressed as whole.

The key to peace in the Taiwan Strait is not found on the Taiwan side, and it does not stem from changes in the domestic political environment. The key lies in Beijing, and the willingness of the Chinese leadership to tolerate the status quo, and to tolerate opposition among Taiwan’s populace to any kind of unification scenario. The armed forces must be ready to respond to changes in Beijing’s behaviour, but to do so they will need the public’s support. 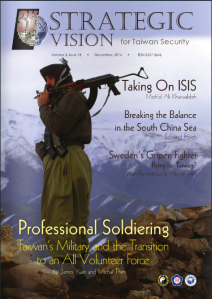