There is a first time for everything, they say. My most recent first time happened on April 8, 2014. I attended briefing for foreign press at the Executive Yuan (EY), organized by the MOFA and with the presence of the EY spokesperson Sun Lih-chyun and representatives from the Mainland Affairs Council (MAC) and the Ministry of Economic Affairs (MOEA). In case you began to wonder, I was not invited because of my awesome journalistic credentials. Instead, I was invited because my piece for The Diplomat made some people unhappy, check the comment section on The Diplomat version of my piece for the response from Taiwan’s de facto embassy in Japan if you want to know why. I had an issue with Taiwan government’s argument that not ratifying (or amending) Cross-Strait Services Trade Agreement (CSSTA) will harm Taiwan’s chances to sign other FTAs or regional agreements. And sorry, I still have an issue with it even after today’s briefing. 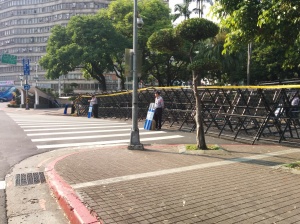 The entrance to EY, corner of 中山北路 and 忠孝東路 (photo by Michal Thim)

Naturally, this point was made once again. The rhetorical question went roughly along following lines: “If we cannot reach domestic consensus, how can we be trusted by international community?”. Oh well, have some faith in international community, dear officials. It it not the brightest thing there was, but it is not that profoundly ignorant not to be able to realize that when Taiwan is making deals with China, it is an extraordinary situation with specific sets of problems. In other words, no one will draw general conclusions about Taiwan’s credibility because one deal with Beijing went south. No. One. The U.S. will have all sorts of issues with Taiwan during TIFA (Trade & Investment Framework Agreement) talks but one of them won’t be that you have domestic troubles over deal with China. I can rather imagine U.S. officials wondering why on earth would you want to open Taiwan’s telecommunication sector to Chinese companies. Speaking of FTAs with major trade partners, when it was last time when you had any serious discussion with Japan? In case you want to try, I am pretty sure Tokyo won’t be upset either about CSSTA not going smoothly. And since we made that crystal clear, can we just stop using that argument? Thank you!

[added:] It is similar story with regional free trade arrangements. Yes, China might punish Taiwan for all sorts of different reasons, including the current issues with CSSTA. But that is not what the government says, is it? It is not about Taiwan’s reputation but about China pressuring other countries not to negotiate with Taiwan. Indeed, Beijing may put pressure on some of the smaller countries negotiating access to Trans-Pacific Partnership (TPP) and since the decision about Taiwan’s TPP accession has to be unanimous, Beijing has a leverage there even if it is not directly involved. The argument that signing CSSTA will enable Taiwan’s access to emerging regional free trade arrangements is flawed in a first place. What is the incentive for China to give Taiwan green light regarding TPP access? What is the guarantee that China won’t give Taiwan hard times anyway? None.

But non-existent consequences for Taiwan’s international reputation were not the most striking point for me that afternoon. No, what made me really wonder was repeatedly stressed point that CSSTA is just about economic issues, not about politics. Not about politics at all. This is interesting claim in relation to question posed by one of the actual journalist present there. Question was whether China has contacted Taiwan’s government regarding stalled CSSTA. The reply was that no contact has been made regarding the Sunflower Movement, only that relevant officials on Chinese side expressed surprise why Taiwan keeps delaying the ratification since the deal is beneficial for Taiwan. Here is the thing that puzzles me. Either China is the only country that intentionally negotiates deal that is more beneficial for the other side, or China is not really interested in the economic part of the deal and has some other agenda instead. I mean, like, you know…political agenda. Something about bringing Taiwan so close economically so it will be able to force it into submission and absorb it into the PRC. When (if) that happens, who would care about bunch of carrots that were fed to Taiwan’s rabbit on the Beijing’s expense. To be sure, I would not go as far as to completely deny that there is plenty of business interests on the other side of the Strait that cares about profit only. Yet, the idea that this or that economic deal with China is not about politics is really difficult to swallow. But let’s give this argument some credit. Yes, I can conceive the idea that negotiations with New Zealand can be just about economic issues (I mean if you just play blind and deaf and skip that part when Beijing mercifully let it happen). But maybe, just maybe, it is because New Zealand does not claim sovereignty over Taiwan (at least not to my knowledge).

But then I realize that I am just plain wrong. All that has been said is true. The reality in which the EY/MAC/MOEA and all relevant agencies operate is a reality where deals with Beijing are politics-free. It is also a reality where China does not aspire to take over Taiwan by force if necessary and a reality where squares are round. It is a pity that the rest of us have to live in the other reality where this does not apply.

The other point that got my full attention was when the EY spokesperson went at lengths complaining that government is having difficulties to better communicate benefits of CSSTA while facing counter-campaign with false arguments. It made one very tempted to ask if spokesperson Sun is in fact saying that he is not doing his job well. After all, the other side is just  group of college students (Taiwan’s government really likes to pretend that protesters are students only) with facebook. Surely, state apparatus can do much better with all the resources at hand, is not it?

Oh, almost forgot this one: the EY is pushing for the Cross-Strait monitoring mechanism bill because public seems to be concerned about this issue! Say what? What made you think so? Does it take three weeks long occupation of the legislature and half a million people picnicking in front of the presidential palace for the EY to realize that? Yeah, people seem to be concerned, you’ve got that one right!

Speaking of first times, this is a first piece in new ‘Commentary’ section. I am not sure how often I will be able to update, but I can promise less scholarly tone on this one…as you may have noticed.