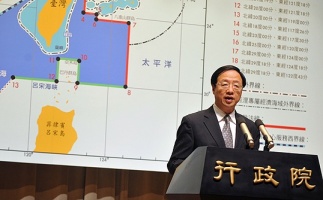 A short time ago, I praised Taiwan for reaching an agreement with Japan on fishing in the area around Diaoyutai/Senkaku islands. It was a rare occasion on which two sides reached consensus on a highly disputed issue involving sovereignty claims and resource sharing. However, the seas of East and Southeast Asia offer plenty of opportunities to get involved in neighbourly spats and ongoing tensions between Taiwan and the Philippines is one such example. This time, a quick settlement may be out of reach. Taipei’s strong reaction is mostly driven by domestic politics and, unfortunately, the way it has been managed seriously deters any show of goodwill from either side. This post will examine the foreign policy dimensions of the dispute, while domestic factors will be elaborated in a separate post in the coming days.

East and Southeast Asian waters are well known to be the subject of a multitude of territorial claims. One of many disputes that has escalated recently is conflict over Scarborough Shoal between the Philippines and China (PRC) – itself a part of larger dispute over South China Sea and tensions between Japan and the PRC over the Diaoyutai/Senkaku islands in East China Sea. These disputes do not necessarily involve physical control over specific islands, and delimitation of Exclusive Economic Zones (EEZ) is often times the real issue at stake. The EEZ is a 200 naval mile (nm) zone extending from coastline (or from straight baselines) within which – according to UN Convention on the Law of the Sea – the respective state has exclusive rights to exploit natural resources in the water and under the seabed. The most recent conflict between the Philippines and Taiwan, which erupted on May 9 and continues to this day, is a case of the latter. It is also evidence that despite the significance of natural resources such as natural gas and crude oil, the most common source of tension remains disputes over fishing rights.

Here is what happened: On May 9 Taiwanese fishing boat Kuang Ta Hsing No. 28 (廣大興28號) was fired upon by Philippine Coast Guard (PCG) vessel MCS-3001, resulting in the death of Hung Shih-cheng (洪石成), 65. Not surprisingly, versions of the event on both sides differ considerably. Location of the incident is less disputed: The Philippine’s Bureau of Fisheries and Aquatic Resources (BFAR) locates the incident 43 nm east of Balintang Island and 170 nm southeast from Taiwan’s southernmost tip Cape Eluanbi (鵝鑾鼻), while Taiwan’s Coast Guard Administration map and other sources locate the incident at roughly 170 nm from Taiwan (Google maps). PCG/BFAR claim that they intended to board and inspect two vessels suspected of fishing illegally in the Philippines’ EEZ. The Taiwanese fishermen did not respond calls to stop and prepare for boarding and Kuang Ta Hsing No. 28 allegedly attempted to ram the MCS-3001. The shooting was therefore an act of self-defense. Taiwan’s Ministry of Justice released report that claimed there is no damage to Kuang Ta Hsing No. 28 that would indicate a collision with the PCG ship (Manila does not claim there was an actual collision) and that the Taiwanese boat has 45 bullet holes, some indicating the use of heavy calibre weapons. The argument is that PCG used excessive force and that international law standards (particularly Article 73 of UNCLOS) does not justify the use of weapons against unarmed boats. President Ma Ying-jeou went as far as calling the incident “cold-blooded murder.” The situation as of 18 May is that there are two parallel investigations, Taiwan’s team is returning from Philippines without success, while the Philippines National Bureau of Investigation is yet to embark on a visit to Taiwan to examine damage to the fishing boat.

At this point the results of the investigation will not really matter. First, since there is no joint investigation either version can easily be refuted as being biased. Second, politicians and public discourse on both sides have already established who is “right” and who is “wrong”. Thus, even the most impartially conducted joint investigation may not be enough to challenge established narratives about the incident. Third, the truth will be difficult to establish beyond any doubt, because the witnesses directly involved on both sides have reason to distort the facts.

The nature of the dispute does not offer much space for compromise. The Philippines argue that if a Taiwanese ship is located within 43 nm from nearest Philippines territory – i.e. Balintang Island – then it is clearly operating in it’s EEZ. Moreover, there are other islands north of the incident location that are still part of Philippines (Batanes Province). Taiwan’s position is that since Taiwan has the right to establish a 200 nm EEZ (the fishing boat was within this limit) then claims overlap and in the absence of an agreement, Taiwanese fishermen can fish there. The Taiwanese boat was apparently outside of Taiwan’s temporary enforcement line, but that merely means that it was outside the area within which the Taiwanese coast guard assists Taiwanese vessels. In addition, some Taiwanese experts argue that Taiwanese fishermen have traditional rights based on UNCLOS Article 51 to operate even within Philippine archipelagic waters. Although it may be argued that Taiwan is not a signatory of UNCLOS (for  unrelated reasons connected to the disputed sovereign status of the ROC on Taiwan), the Philippines is a signatory and should not deny other states the same rights. Yet, Taiwan’s interpretation of UNCLOS provisions seems to be too relaxed: If there was an arbitration (which there will not), it is prudent to assume that the line separating Taiwan and the Philippines’ EEZ would be closer to Taiwan in Bashi channel rather than much further south in Balintang channel where the incident occurred.

In the aftermath of the incident, Taipei – hard pressed by a domestic outcry – issued a set of demands and set 72 hours ultimatum (that expired by midnight GMT+7 on 14 May) for those demands to be met. Taipei demanded that Manila

The last point indicates that Taiwan’s government decided to seize the opportunity and use the incident to press Manila to negotiate an agreement. The latter is reluctant to enter into talks that would provoke an angry reaction in Beijing, which would add to already problematic relations between the PRC and Philippines. Manila is in a less favourable position than Japan which can better withstand Beijing’s displeasure over making bilateral agreements with Taiwan (thus recognizing its de facto independence). Thus, Taiwan’s government seeks to kill two birds with one stone: delimitation of maritime border and a diplomatic success in confirming its de facto status.

The Philippines is reluctant to play ball. Not only does it want to avoid unnecessary confrontation with China, it lacks incentives to make such concessions. Japan’s fishery agreement with Taiwan put Beijing in the position of troublemaker, and Tokyo was therefore willing to make concessions, despite domestic opposition from Okinawan fishermen. Yet, in this case such motivation is absent on Manila’s side. Therefore, Taiwan’s attempt to push the Philippines does not have much chance of producing a desirable outcome. Unless of course, Taiwan plans to use its superior navy to force Manila into accepting de facto freedom of fishing for Taiwanese fishermen in the disputed area. However, if this is on the minds of decision makers in Taipei, they must be also aware that the U.S. would not take lightly deployment of U.S.-made arms against its treaty ally. Some more hawkish individuals may indeed consider such options but overall it should not be considered likely, because benefits (securing the fishing area) would be outweighed by the costs, i.e. an irritated U.S. and an international image of being a bully.

This article was originally written for China Policy Institute.

2 responses to “Taiwan’s dispute with the Philippines (I): One international law, two interpretations”