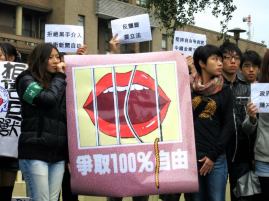 Taiwan’s youth is often referred to as the ‘Strawberry Generation’, unable to work hard, selfish, spoiled, and disinterested in public affairs. Data shows that such labelling is untrue. In fact, the Taiwanese are shouldering the longest working hours in the world; a burden carried jointly across generations. Yet, one label given by the ‘veterans‘ of great political battles from 1980s and 1990s still sticks; young people nowadays are not interested in politics and do not care about the big issues society is facing. However, recent youth-driven protests over media acquisitions by Beijing-friendly businessmen prove critics wrong.

On 26 July 2012, the National Communication Commission (NCC) approved the acquisition of China Network Systems (Taiwan’s second largest cable TV network) by Want Want Group, effectively handing one third of the cable TV market over to the new owner. The Chairman of Want Want Group is Taiwan’s richest man Tsai Eng-meng, a controversial figure and advocate of prompt unification with China. According to a longitudinal survey, his views on unification are at odds with the majority of Taiwanese.

NCC’s decision prompted a first wave of student-led protests later followed by a larger demonstration that took place on September 1st this year. This time, the protest also addressed the smear campaign against academic Huang Kuo-chang, wrongly accused by Want Want Group media of paying students to attend the first protests. For the opponents of the deal, this was a clear example of why the merger should have been rejected by NCC.

In November earlier speculation that Want Want group intended to buy Next Media assets in Taiwan came true when an agreement was reached between Next Media founder Jimmy Lai (businessman and democracy advocate from Hong Kong) and a group of Taiwanese businessmen led by Tsai.